It really does seem like the coconut can do no wrong.  As my reading and research continues on Whole Self Health (try saying that one 3 times fast!), I’m continually finding information about how healing and nourishing the beautiful coconut really is.

My most recent adventure with Miss Coco?  Cracking her open and drinking her glorious water! 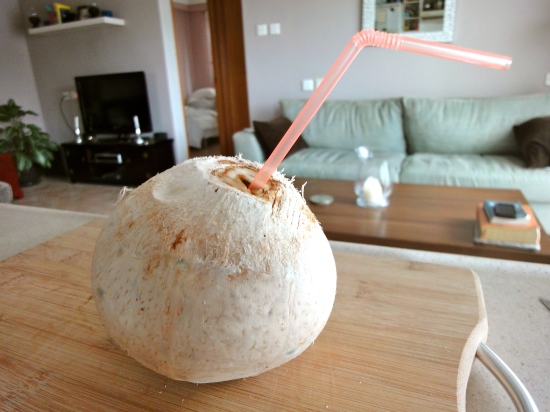 I must admit, I never really gave the mound of coconuts much thought when passing them by at the grocery.  Maybe a quick glance.  An occasional thought or wonder.  But I never contemplated long enough to give in to the temptation.  To be completely honest, I had no idea how to open them, and so my sliver of intrigue wasn’t enough to motivate me.

Until, that is, I learned a thing or two about them.  First off, it’s the young coconuts that are the easiest to open.  In our grocery here in Sai Kung, they’re small and white (Opposed to the larger brown ones that are much more difficult to open.  I once tried unsuccessfully with a hammer and and nail!) and have two visible “eyes”, kind of like a bowling ball.  These will be very hard and very difficult to penetrate.  But if you press opposite these eyes, you should be able to feel a soft spot.  This is where you want to cut/stab in order to get to the juice.  Often times, the soft spot will be just under the tip of the coconut.  So just cut off the top and stab around and you should be able to easily punch a knife or straw through it. 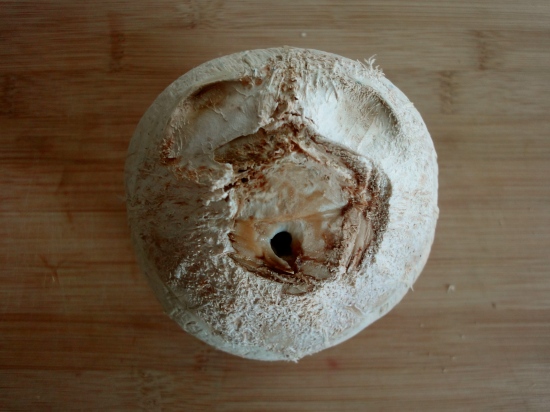 Half the fun of drinking coconut water is drinking it straight from the coconut with a straw.  You just feel like you’re on holiday.  But once that juice is finished, don’t forget about the meat inside.  Equally tasty, equally yummy.  Crack it open a bit more and scrape the insides with a spoon and wah-la!  The perfect snack.  Or a great addition to any smoothy.

And now for the good stuff.  Why coconut water, you ask?

Some of this information was sourced from Coconut Research Center.